The 2014 Ethics & Compliance Program Effectiveness Report: Reporting Structures and Tone at the Top

Recent years have seen considerable discussion of whether or not the compliance function ought to report to the general counsel, which is true of just less than half of this year’s sample. Most of the discussion hinges on avoiding the potential for conflict of interest between the two functions, but the PEI analysis suggests there may be more to it than that. Programs led by an individual reporting to either the CEO (22 percent of the total) or the board or one of its committees (16 percent of the total) have average PEIs of 0.63, substantially outperforming those reporting to the general counsel (average PEI scores of 0.58.) The point is made clearer with the comparison of quintiles. Among the more effective programs, far fewer report to the general counsel, and far more to the CEO or the board than at less effective programs.

It seems likely that a more prominent “seat at the table” for chief compliance officers reflects the greater importance accorded to their role and the issues in their organizations. Although many factors are likely at play, it is hard to overestimate the many benefits to the E&C program arising from proximity to the CEO; not the least of which is the message it sends to the organization as a whole.

Board oversight is an important indicator of the degree to which ethics and compliance are a matter of corporate focus, and ethics compliance officers need to enable this by regularly reporting to the board on E&C issues. The majority of compliance officers update their boards either two or four times a year, but the very small sample—4 percent—of respondents who said they don’t update their boards at all, let alone report to them, has an average PEI of 0.48, among the lowest of any score in the analysis.

Tone v. Tone: What Matters Most

Regardless of reporting relationships, the “tone at the top—reflected in what the CEO does and says—is clearly associated with program effectiveness. 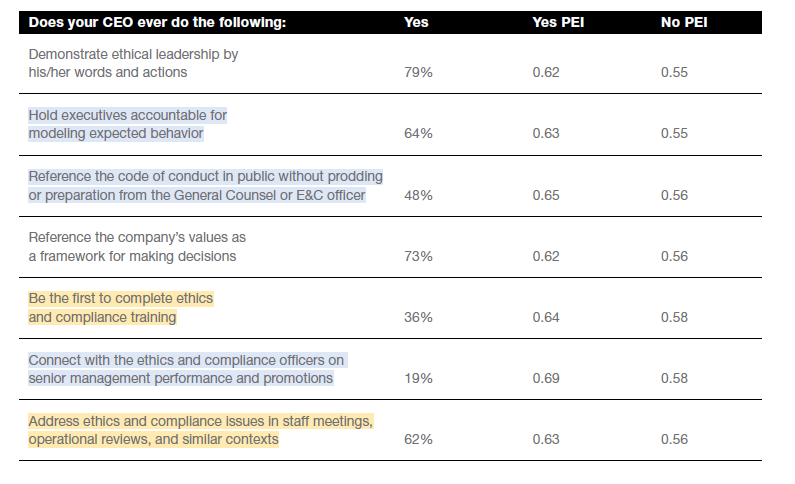 Though everything the CEO does seems impactful, the most significant correlation is seen where the CEO connects with E&C officers on senior management performance and promotions. It is another illustration of the impact associated with programs that are deeply embedded in the core operations, and are strategic concerns, of the companies they serve.

Active, consistent, and sincere board and CEO involvement in these matters make it clear throughout the organization that behaviors matter as much as outcomes—that culture matters more to long-term achievement than does quarterly performance. Programs in those organizations embracing the importance of culture as a competitive advantage have average PEI scores of 0.64, as opposed to the 0.54 average PEI score found within companies that do not appreciate the connection.

Tone vs. Tone: Whose Matters Most

Given the distance from which the tone at the top is generated, the “tone in the middle” should be of critical concern to E&C leaders. Few employees interact regularly with members of their organization’s C-suite, and, as LRN research has previously identified, C-suite executives have a vastly different and more favorable view of their governance, culture, and leadership structures than do the employees they lead.  At every level, from team-lead to business unit head, management models behavior and decision making, clearly identifying the company’s actual values. In the event of a conflict between those actual values and the values being espoused by the E&C program, the program is unlikely to prevail. 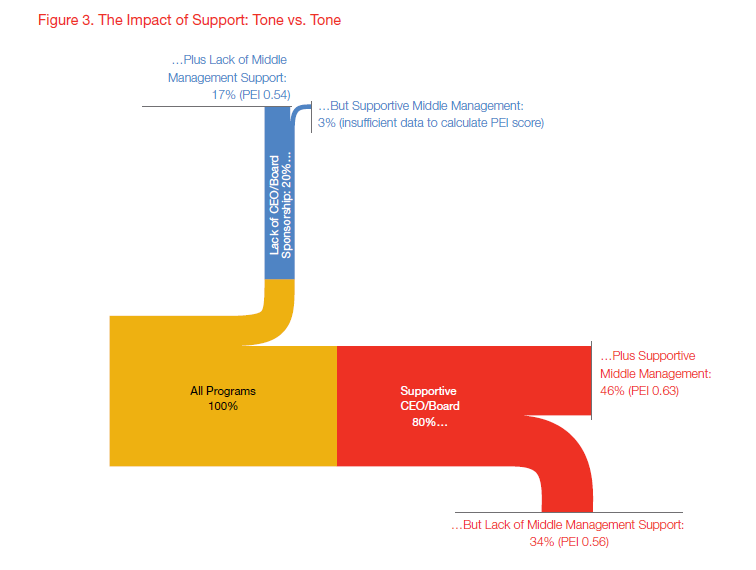 While both seem necessary, it should be noted that 34 percent of all programs struggle with their middle management, despite CEO and board support. By contrast, fewer than 3 percent of respondents identified a setting in which tone in the middle was supportive while support at the top was lacking.