By a ratio of three-to-two, more programs pursue as a primary mandate “ensuring ethical behaviors and alignment of decision making and conduct with core values” than pursue “ensuring compliance with rules and regulations.” Those in the “values camp” have a higher average PEI (at 0.61) than those focused on rules (0.58). More telling is that more than two out of three of the most effective programs are values-based, which is true of fewer than half of the programs in the lower quintile.

Program goals appear to matter most when they reflect a positive integration with the entire company’s operations and priorities. Thus, we see particularly low PEI scores for programs for which adapting to meet changing business needs is not high on the agenda (0.57), for those for which third party oversight isn’t a priority (0.57), and even more so if risk management isn’t a program priority (0.52). The poor performance of programs not focused on ethical leadership (0.55) or the use of company values as a framework for decision-making (0.54) likely also reflects both the importance of connecting the program to the essential elements of the company’s operations, as well as the consequences of failing to do so. 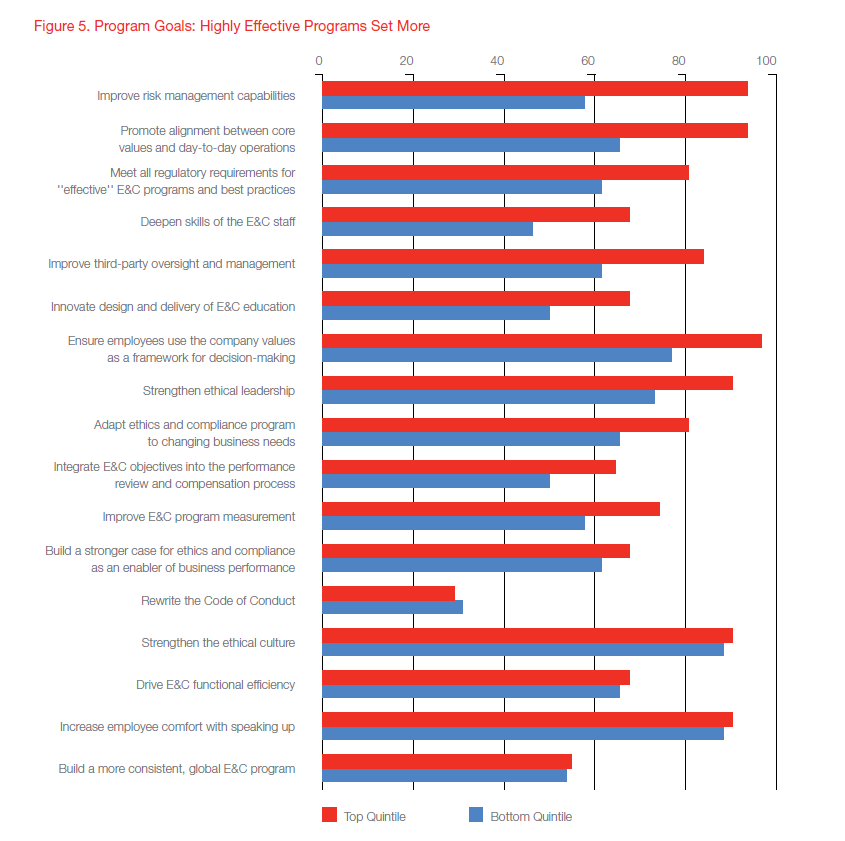 Most practitioners would agree that meeting regulators’ expectations for the design and implementation of effective programs and promoting alignment between the company’s core values and its day-to-day operations are both fundamental. Programs with those tasks as express goals surpass the mean PEI score far more often than not. E&C programs that don’t feature them on their to-do lists significantly underperform, each with PEIs of 0.55.