As my colleague Dov Seidman says, in our hyperconnected and interdependent world, behavior – all the ways we communicate, govern, operate, relate and make decisions – can be competitive advantage or a source of downfall. A quick glance through the headlines of the day proves the point. Whether we’re talking about the leaders of our corporations, governments, or institutions of one kind or another, behavior – often the bad kind – is on public display 24/7. But you don’t need to be written about in the headlines to feel this reality.

THE LEADER WHO JUST WON'T CHANGE

Nicki was a Senior Vice President for a big insurance company. In her mid-40s, she’d been successful at climbing the corporate ladder, in part because she was great at getting creative ideas to scale through the complexities of her organization. This was her first role leading a large team and a profit center, but it wasn’t going well. Her team’s engagement scores were a disaster, several of her employees had left, and the rest were burnt out and frustrated. The feedback to Nicki was clear: she needed to show some compassion. Her team members were practically begging her to see, hear and respect the challenges they were going through. They were working incredibly hard to meet aggressive demands and they craved gratitude, patience and care. It’s not like listening was a skill gap for Nicki. She did it well with partners and clients. As the team leader, there were no barriers preventing Nicki from setting up a forum to listen. But she didn’t act on the feedback she was receiving. It wasn’t long before her staff started talking – some of the most disgruntled employees posted about their experiences on social media and wrote critiques about Nicki on Glassdoor. The news spread quickly across the company. Nicki’s personal brand as a leader in the organization was in jeopardy. Worse still, her results were a disaster. Management decided Nicki hadn’t demonstrated the leadership potential they’d hoped to see, and eventually she was demoted into an individual contributor role.

Why didn’t Nicki listen to her team? Why do some behaviors seem so hard to adopt - even when we know they’re in our best interest? These are questions we ask at LRN a lot. We help companies discover their values and how to translate them into actionable behavior. Our philosophy, backed by research, tells us that acting from a place of values will help your company outperform, time and time again. But even once people know that - even once they agree to behaviors they’ve helped define - they still don’t do it.

To answer these questions, we need different mental models that reflect our changing world. Decades of research predicting health-related behavior change may shed some light on why it’s so hard to change our behaviors at work.

The Reasoned Action Framework (also known as the Theory of Planned Behavior or the Integrative Model of Behavioral Prediction), was pioneered by psychologists Martin Fishbein and Icek Ajzen in the 1970’s to understand why people do or do not make good health choices. The framework revolves around a simple idea: our intentions play a massive role in determining what we say and do. Granted, it’s not intentions alone – skill (your capability to do it) and the right environmental conditions (your freedom to do it) are important too, but the theory suggests that if both of those things are a given, we change because we want to change.

So what makes us want to want to do something? Reasoned Action says the answer is beliefs, specifically three types of beliefs:

There’s a lot to learn from applying Reasoned Action at work. To thrive individually and collectively, we each need to take accountability for our actions. But the only way we can do that is if truly pause to understand what’s driving our behavior. Through deliberate self-awareness, we can make more conscious choices.

Let’s go back to Nicki. A Reasoned Action explanation for her inertia might have looked something like this:

Even if just some of these beliefs may have been lingering in Nicki’s mind, that’s a lot of good reasons why she may not have wanted to act with compassion. Reasoned Action wasn’t just built to describe why people do or don’t act; it can help us identify what beliefs we need to change or reinforce to make us more likely to take action. Use this worksheet and try it for yourself.

How do corporate and production teams view culture in manufacturing?

In the manufacturing industry, both production and corporate employees have different roles and ideas about their company cultures. LRN data explores why. 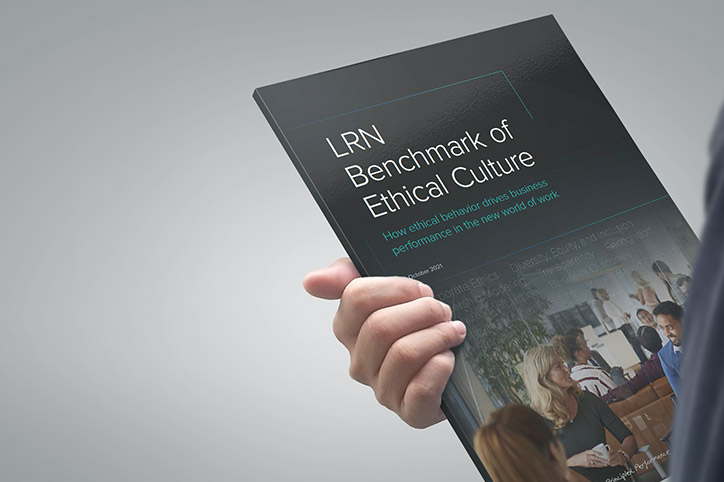 Insights from the LRN Benchmark of Ethical Culture show how companies that successfully retain top talent are the ones putting people and culture first.